Social listening potentially made investors £75,000 yesterday morning when a blog post from an ex Daily Telegraph journalist apparently lead to an increase of c. £75 million in Dixon Retail’s market capitalisation.

At 9.52am yesterday, Dixons and Carphone Warehouse confirmed they are in the “very preliminary” stages of merger talks.

This confirmation wasn’t planned however. An hour earlier their existence was the subject of a blog post by former Daily Telegraph M&A and Markets Editor, Ben Harrington. Ben tweeted a link to the post shortly after publishing: 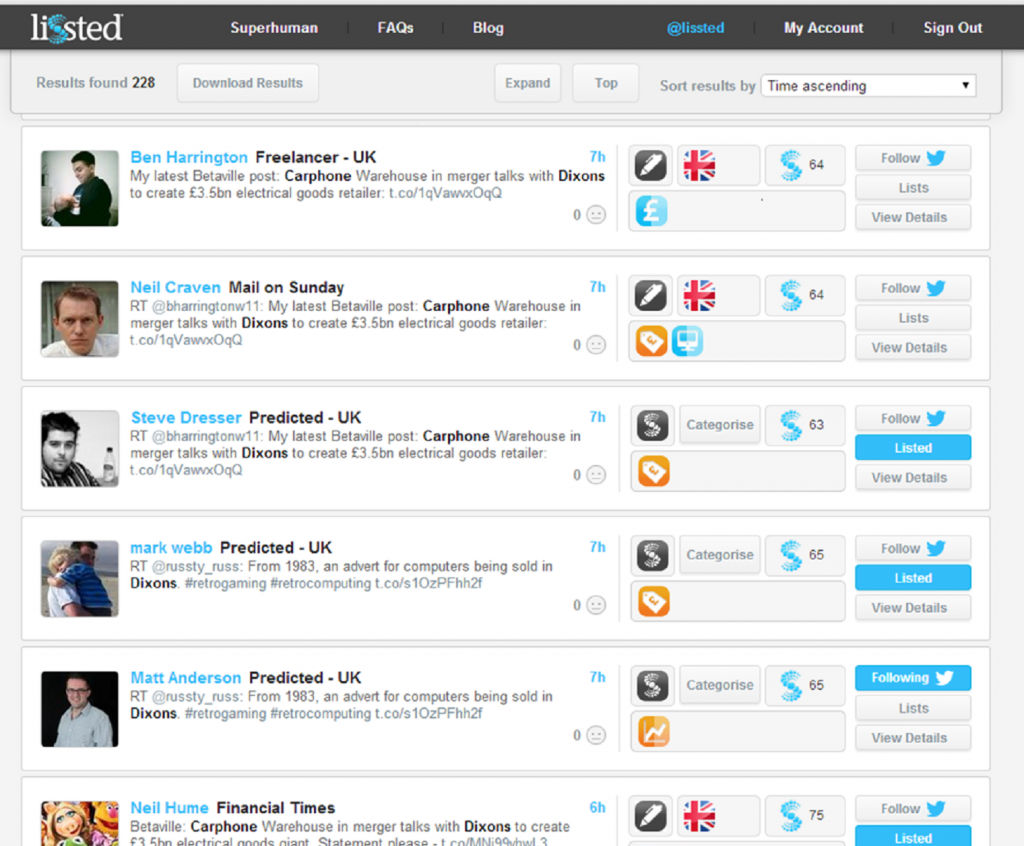 Some people were listening 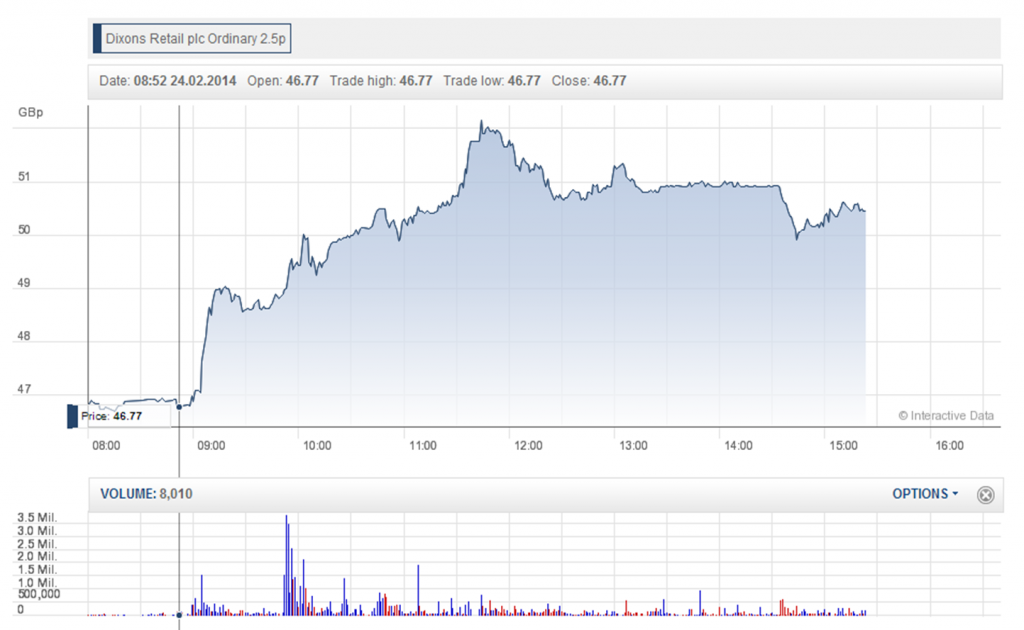 In the 20 minutes after the blog post was published around 10x this number of shares (c. 5 million) were traded (mostly purchases) and around 90% of these were traded between 9.05-9.11. This resulted in the price rising to nearly 49p per share, an increase in the market capitalisation of the company of around £75m. 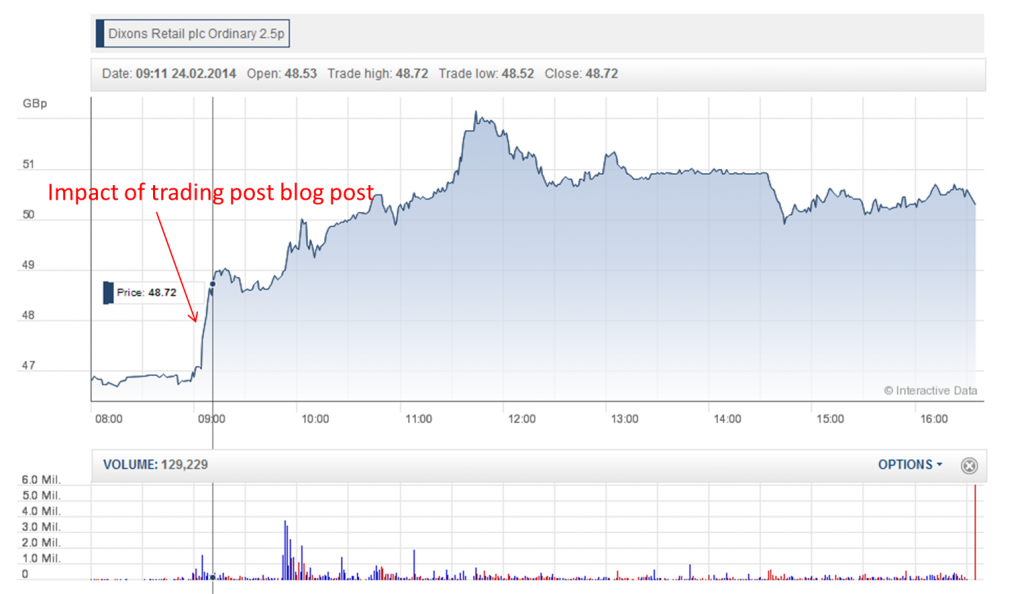 The activity died down at this point and the price settled at its new level between 48.6-49p.

Then at 9.52, when the official confirmation came through, activity jumped again with around 20 million shares traded in the first 12 minutes after the announcement and the price reaching 50p.

It was only at this point that the mainstream media started to report on the talks. 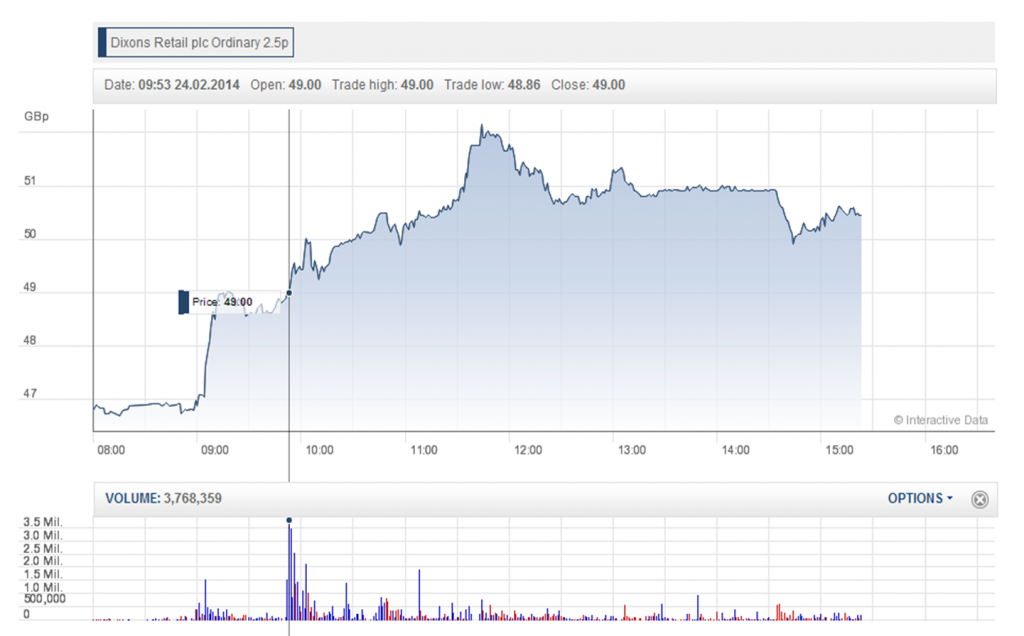 The value of being early

Those who were aware of the published rumour, and prepared to purchase shares in the initial 20 minutes, would have acquired their holdings at lower pricing.

Based on estimates during this window for share purchases of 4-5 million, and average price paid of c. 47.5p, gives a potential gain of around £60,000-£75,000 for these “quick off the mark” investors.

Not the only value around

There were many other valuable reasons to be aware of this story quickly. Reputation management, analyst relations and HR being three obvious ones.

However, here’s an example where the £ note value of social listening can truly be demonstrated.

N.B I’ve focussed on Dixons because the trading activity around Carphone Warehouse during the period before the official confirmation was considerably less, which raises some interesting questions of its own.